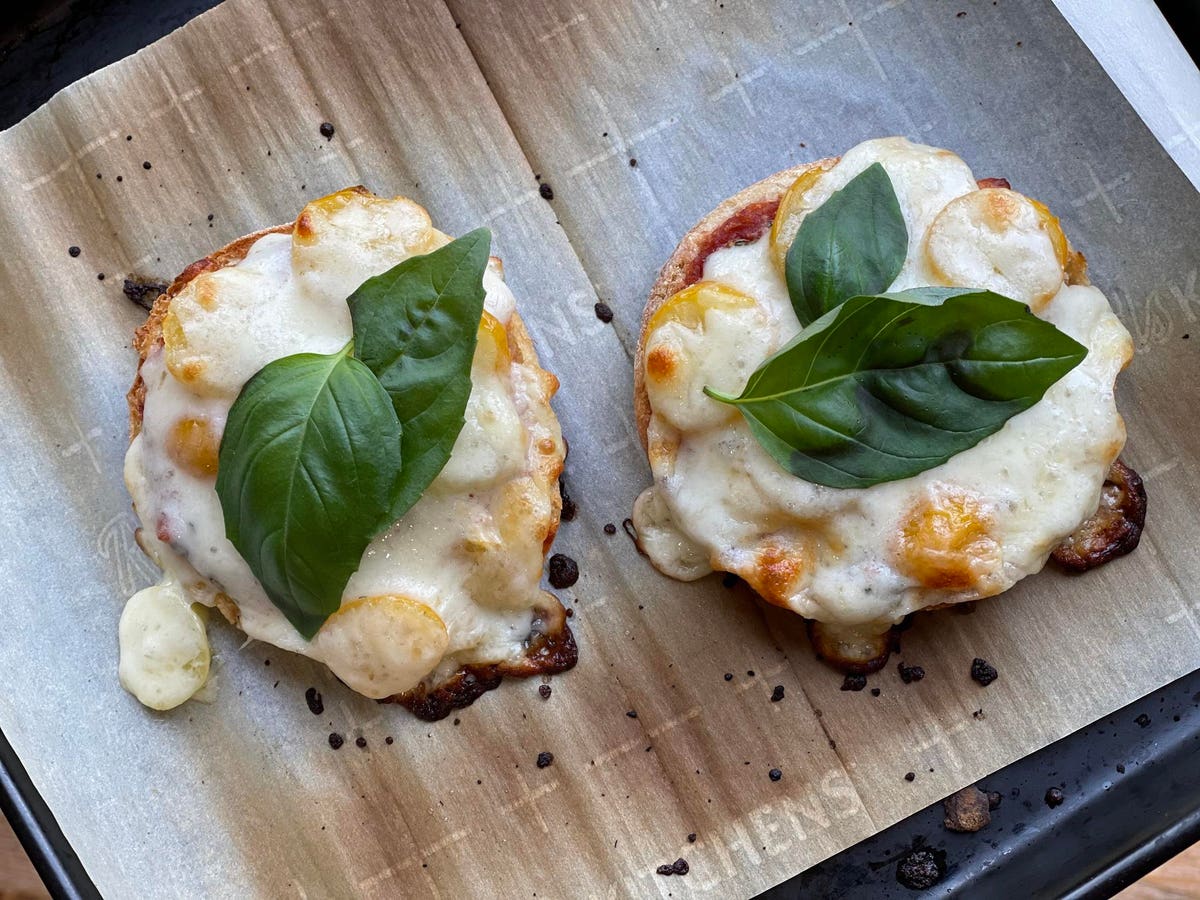 People tend to take English muffins for granted.  They are the bread component in a number of breakfast sandwiches including the iconic Egg McMuffin and the classic Eggs Benedict.  To some, an English muffin is just another piece of bread, but for English muffin lovers, they are so much more. I have a Chilean friend who would literally bring a suitcase full of her favorite English muffins back to Santiago every time she visited the United States.

Like so many people, I grew up eating English muffins, and I still love them. For those who don’t know, English muffins are generally regarded as native to the USA and called English muffins to distinguish them from the sweet quick-bread style muffins like blueberry and pumpkin muffins that are so popular here.

It is believed that Samuel Bath Thomas, who emigrated to NYC from Plymouth, England, baked English muffins for his bakery using his mother’s recipe. His English muffins were so popular that he began selling them to hotels and grocery stores and eventually created Thomas’ English Muffins. His bakery was open by 1880 and in a 1926 Trademark filing, he claimed that he used the term “English muffin” as early as 1884.

Meanwhile, in Kansas City, Mo, a corner grocery store opened in 1910 and started baking their version of super-thick English muffins using tuna cans as the molds. The corner store became Wolferman’s Bakery and was known for its super-premium English muffins. They are still made to this day using the original recipe and are baked in the original super-thick size, as well as a smaller traditional size and a mini muffin. Today the muffins come in many flavors including the 1910 Original, Sourdough, Cranberry Citrus and Cinnamon Raisin, are sold online and shipped nationwide.

For English muffin aficionados, it is important to split the muffin with a fork giving each side a rough texture filled with “nooks and crannies.” Incidentally, Thomas’ English muffin claims to be the original ‘Nooks & Crannies English Muffin’ but it has become a commonly used term. After the muffin is toasted, it is generally served with butter, jam and/or honey. But for me, the best way to make an English muffin is to butter it before toasting it.  Since the butter bakes and bubbles as the bread toasts, you get this delicious hot butter baked-in English muffin that tastes more buttery and slightly caramelized than a toasted English muffin spread with butter.

I love making the pizzas with the traditional size and the mini English muffins. I save the original  Super-Thick English muffin for breakfast or as a “bun” for burgers or other substantial sandwiches. The original super-thick size comes in 12 flavors. The cornmeal is my favorite and particularly great for sandwiches, but there is a flavor for everyone.

When assembling my pizzas, I toast the split muffins first to remove any excess moisture and make the “crust” a little crisp before topping them and baking them at 400°F. They are particularly suited for a toaster oven, but a regular oven works as well.

Now that my palate is a little older and more refined, I top them like I top any pizza with crushed San Marzano tomatoes, salt, pepper, cherry tomatoes, Parmesan and mozzarella cheese, and basil. Sometimes, I add some sautéed mushrooms and pepperoni, but my favorite version is the simple margarita on an English muffin.

I generally have all the ingredients on-hand, making these pizzas a welcome option for lunch or dinner, and the mini Margarita pizzas are a huge hit as appetizers with drinks. The recipe below is for 1 regular English muffin and makes 2 English muffin pizzas. The amounts can be increased the more you make. If you use the mini English muffins to make appetizers, use just enough toppings to cover the muffin.

Split the English muffin with a fork.  Toast until lightly brown.  Remove from toaster oven.

Place on the toaster-oven sheet pan or regular sheet pan that is lined with a piece of parchment paper. Top each side with a spoonful of crushed tomatoes and spread from end-to end. Don’t put too much on or it will be soggy.

Season with dried oregano and sprinkle all over with grated parmesan. Season lightly with salt and pepper as both cheeses are salty.

Top with mozzarella and place in toaster oven or regular oven for about 10 minutes or until the cheese is bubbly and melted.

Top with a sprig of fresh basil and enjoy!