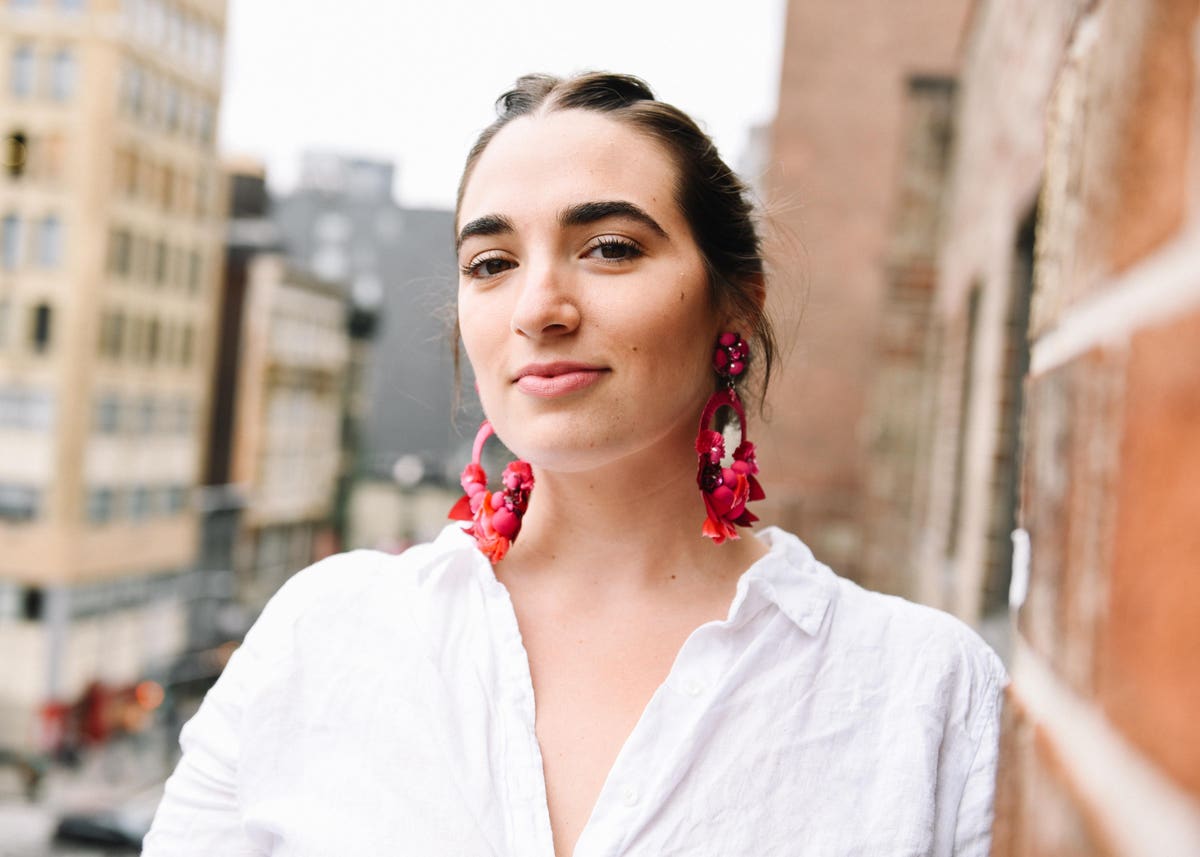 For Dolly Meckler, founder of Challah Dolly, the Jewish High Holiday season that includes Rosh Hashanah (which is the Jewish New Year) and Yom Kippur (the Day of Atonement), can essentially be considered her business’ “Black Friday” in terms of demand.

Meckler’s signature selection of challah loaves are available year-round on Challah Dolly’s website, but she created a round loaf of challah to be enjoyed for the Jewish holidays, in two flavors: regular and cinnamon raisin. (According to Jewish tradition, the round shape symbolizes the circle of life and cinnamon raisin signifies a “sweet New Year.”).

But first, let’s slow our scroll: what is Challah Dolly?

Challah Dolly is a New York-based company founded by 29-year-old Dolly Meckler, which ships its loaves of the traditionally Jewish bread (known for its braided look and egg-based recipe) weekly across the United States, and is available at several bakeries in New York City.

She successfully managed to take her bread-making business from curbside to nationwide, within a year, all thanks to a drive for sparking joy, a passion for storytelling, and a devotion to encourage people to “eat and enjoy bread.”

Its origin story involves the pandemic, happenstance, the magic of bringing people together over bread, and Meckler’s mission “to make Jewish tradition ‘cool, modern and accessible.’” A New Yorker feature this past May and a nationwide distribution plan have helped make Meckler’s brand a bona fide food business.

For Meckler, baking bread served as a passion project during peak quarantine, back in March 2020. One could say it was an accidental career opportunity, more than a pivot.

Meckler had been working as the social media manager for HBO’s Game of Thrones and Westworld for four years, followed by a social media role at YouTube. The native New Yorker wanted to take a risk — “the plan was to not have a plan,” she explains — so she moved to Los Angeles in October 2019 and set out to find freelance social media work and focus on her web series and podcast, Hello Dolly!.

And then, the pandemic hit and like many others, her plans took a dramatic detour.

Here’s where Meckler’s social media skills came into play and worked for her: in the midst of the doom and gloom created by COVID, Meckler took up baking.

“Instead of stressing out about this, I decided I was going to bake,” Meckler shares.

She didn’t cave into the sourdough phenomenon that became ubiquitous on Instagram and TikTok (“Have you ever looked at sourdough recipes? They’re so complicated!”) — and instead leaned into something simple and sentimental to her: challah bread.

Meckler’s only prior experience with challah-making stemmed from her days at Jewish summer camp — it wasn’t a family tradition for her — so she found a recipe on The New York Times and got to work baking and braiding in her tiny West Hollywood kitchen. But since baking became a popular pandemic pastime, Meckler had to contend with a yeast shortage in Los Angeles. Thanks to her social media savvy, she was able to leverage her content creation skills to share behind-the-scenes content of her search for yeast in Los Angeles, and of early-day customers coming to pick up her challah loaves, curbside.

Her challah content gained traction and created buzz on social media, which led to Meckler’s bread becoming waitlisted — all orders were placed via Instagram direct messenger.

In the meantime, Meckler was feeling the urge to return to New York City to be with family and friends — she’s a proud New Yorker, through and through, so she headed back to the East Coast and committed to growing her bread business even more. There was already brand awareness, it was just a matter of sprinkling in more strategy and a plan for scaling.

When it came time for branding, Meckler landed on Challah Dolly as the title for this venture, since she’s also the host and creator of a web series, Hello Dolly!, and she hired a friend to create the logo.

She started baking in her Upper East Side kitchen and then when a TimeOut New York feature on Challah Dolly hit in August of 2020 — it helped her bread gain certified street cred in the foodie world. At this point, the challah recipe had taken some twists from the original, and Challah Dolly now uses Meckler’s own formulas for its variations.

The three signature flavors on the site include The Honey Cinnamon, The Everything Seed (“a classic New York City everything bagel staple, reimagined”), and The OG ‘Challah Dolly’. All holiday-inspired round loaves of bread are available through the month of September.

Meckler knew it was time to level-up and use a larger facility to take her loaves to the big leagues, so she approached a bakery in the Lower East Side about baking her challah loaves temporarily and having a pop-up there.

Meckler is a hustler and entrepreneur at heart — and wanted to ensure that everyone could enjoy her challah, especially Jewish families celebrating at the Shabbat table.

Today, as a result of the word-of-mouth marketing created by Meckler and her FOMO-inducing Instagram content, Challah Dolly has a direct-to-consumer website as well as a burgeoning wholesale business, and currently outsources the challah-making to a large-scale baking facility in Queens.

Challah Dolly ships nationwide, including Hawaii, and its loaves are available at six different retailers in New York City.

“It’s about trying new things with challah. It’s braided and bold. That’s what it’s all about,” Meckler asserts.

And since part of the boldness is building hype around challah, Meckler also partnered up with other brands for some limited-edition collabs, including MatchaBar for a matcha-flavored challah and Tony’s Chocolonely for a soft pretzel chocolate challah. Fans of savory challah also enjoyed a pesto parmesan limited drop.

What makes Meckler’s story even more extraordinary is that she’s not a trained chef — her primary career focus has always been social media content, strategy and production (she studied television, communications and media, and also has a degree in gender studies). A storyteller and entrepreneur at heart, Meckler knew she had stumbled on something with promise — on several levels.

“It wasn’t a career pivot. It was more of a career shift and an awakening based on my skills. It’s about, how can I apply what I’m good at to this thing? I’ve definitely always valued marketing, and now I understand the value of storytelling and how to communicate with audiences.”

At its core, Challah Dolly weaves together Meckler’s passion for storytelling, meeting people and creating content. In this case, “content” in the literal sense and in the sense of “sparking joy.”

Going back to the early days of Challah Dolly, Meckler recalls how much she loved chatting with customers who reached out via DM and came by for curbside pickups. (This speaks to one of her earlier career ambitions of being a talk-show host.) Today, she is sparking up conversations with those who attend IRL pop-ups.

“I have met so many people and heard so many stories through this business and being in this food world. It’s been so fun and truly beautiful to meet this whole new group of people that I would have never met before, and hear why they want to buy my bread,” Meckler shares.

The concept of bread bringing people together — whether to pick up loaves in a socially-distanced manner during the peak days of COVID, or enjoying breaking bread together at the dinner table, is what nourishes Meckler.

Her other podcast series, called You Have Such a Pretty Face, shines a light on living in a larger body, overcoming fat phobia, and the beauty of body diversity — and encourages others to “eat the bread, guilt-free.” It focuses on body image and Meckler’s desire to create something fulfilling, especially while she was faced with the looming uncertainty of the pandemic.

“Growing up in a larger body helped shape how I see the world,” Meckler shares. “And so I started to talk about that with other women, including plus-size models and professionals. And it was really shocking how similar all of our stories were. And I realized that talking about it publicly was so healing, because it removed the shame. Challah Dolly’s other mission became about, Don’t be scared of carbs. At the root of it all, it’s about making people feel good.”

The core ethos of Challah Dolly, Hello Dolly! and You Have Such a Pretty Face is based on bringing people joy — that’s the through line of Meckler’s work. This joy is woven into each Challah Dolly loaf, as well as the content she creates with the podcast and web series.

“It’s always been about people,” Meckler asserts. “I’ve always been interested in people and building relationships with people using different forms of communication.”

Challah Dolly even went the accessory route with a deliciously iconic moment: the earring and ear-piercing brand, Studs, created a challah-inspired earring shaped like the braided treat. Meckler lovingly refers to them as “Challah Choops” — they were designed by Garbage NY in honor of the “Studs Loves New York” campaign (as Meckler’s challah was named “the unofficial bread of NYC”).

For a brand that is considered “social-first,” Meckler has come a long way since the early days of searching for yeast in Los Angeles.

“I didn’t know what I was doing! And I really had to learn day-by-day and take risks and figure it out,” Meckler shares. “No one said to me, ‘Dolly, you need to scale this thing, from the beginning.’ I called a bakery in New York, who was struggling during COVID to see if they wanted to partner together. I’m very scrappy, in that sense. I wanted to work with another local business to help bring it back. I love this place and I want Challah Dolly to be synonymous with New York — it’s this New York brand with this New York soul behind it, who is a hustler, who doesn’t take ‘no’ for an answer, and who is going to knock on doors to make it happen.”