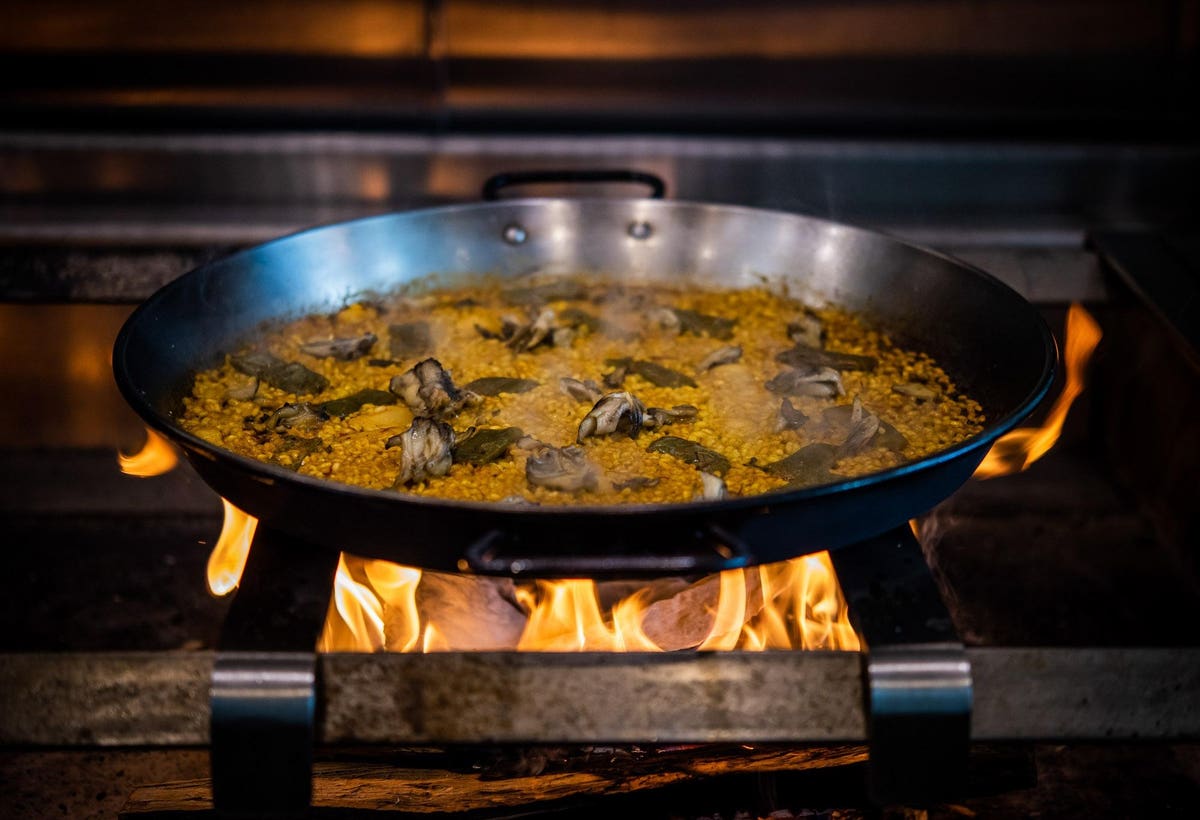 It was a long road to six tables. Diners at Xiquet, in Washington D.C.’s Glover Park, experience Valencian cuisine in an intimate dining room with views of Chef Danny Lledó firing up their tasting-menu dishes over a wood fire in a glass-enclosed kitchen. After his success with Slate Wine Bar and winning numerous paella competitions, opening Xiquet in 2020 was a dream come true for Chef Lledó — only to have it shut down by the COVID-19 pandemic later that same month. He and his team persevered, hosting paella classes online and selling meal kits, until finally reopening in 2021 and being rewarded with a Michelin star in the process. I spoke with Chef Lledó about the past difficult year, his culinary passions and how he thinks the pandemic actually helped him to focus on Xiquet’s mission.

What are your culinary memories from growing up?

My dad was a chef and my mom was a great baker. My family had farms in Portugal and I saw the humble and hard work. I saw my aunt chasing a rabbit with a knife once. I remember bread being baked in a wood oven and the paella coming to the table and all the work that goes into it. And family coming together. The biggest impression on me from both parents was the passion and quality in everything they did.

When did you realize not all families ate like yours?

In grade school. I remember my bag lunch was this elaborate roast beef sandwich — and the eyeballs I got from every kid. I was able to trade half my sandwich for an entire peanut butter and jelly sandwich plus a bag of Doritos. And I still got half of my own sandwich. That really stuck with me.

What made you realize you wanted to be a chef professionally?

A little tragedy mixed in with self realization. I injured myself playing soccer and a month later my mother passed away. I was out of work for 3-4 months and I realized I wasn’t passionate about what I was doing in the financial industry. I grew up in the restaurant business, it was embedded in me. It was time for me to do what I was meant to do.

In addition to being a chef, you also trained as a sommelier.

Both sides of my family make wine. As farmers it’s just another crop you grow. When I became a professional, I saw wine dinners as something I absolutely love, both as a participant and then hosting them. That gave me a sense of pairing. When you study a wine region you also study what they cook — magically enough they go together. When I’m unfamiliar with a wine it’s a challenge to build a dish that goes with it. Understanding both — wine with food, food with wine — that gets us to a tasting menu.

Is that how the concept for Xiquet come about?

I wanted to do a spanish restaurant, obviously with some paellas, but I wanted to do it my own way. We were looking at the space and how best to structure it. When I opened Xiquet we had 30 seats and an a al carte menu and the idea was to create a small setting to allow us to focus more on guests.

And then Xiquet opens the same month the pandemic hits.

The excitement was amazing, but I was like a horse with blinders on. I wasn’t paying attention to what else was happening, learning some hotels were already getting ready for this. During the first we got as many reservations as cancellations. I didn’t understand at first — there have been outbreaks before. But it was pretty tragic. That whole process of opening and then going back to zero and understanding that we’re not built for “to-go.” Having to transition the first 30 days was painful. We didn’t know if this was going to work.

And that’s when paella helped save the restaurant?

So many times we thought we couldn’t survive. We started doing paella cooking classes on Zoom. We did public ones and then private companies started hiring us. Then we starting seeing real revenue. I did a paella class for 100+ families and each of those private classes generated thousands in revenue. It took days to portion out all the ingredients and then deliver all the kits. It wasn’t just about keeping the money coming in, it was also keeping people employed.

How did it feel to get the Michelin star after all that?

What it meant for me was validation. Not just in terms of concept, but that it was the right thing to keep going and not close and try to reopen some other time. After a terrible year I was very thankful. It was also my first review as a chef. It’s the first time anyone has talked about me.

How have things changed now that you’ve reopened?

We reopened in June and went from 10 tables down to 6. In some ways the pandemic facilitated our progress because we had the time to focus. We opened with a 5-course and 8-course menu, and now we’re going to 14-courses. To some degree it would have taken us 3-4 years to get to the place we are now without the pandemic.

What can people expect from the Xiquet tasting menu?

What’s unique about us is the Mediterranean aspect of Spanish cuisine, which is heavy on seafood and vegetables. We want to find harmony and have one dish building on next dish. We also want to push limits and have a cultural experience done in a modern way. We served an Iberian pork tenderloin tartare, which is mind-boggling for people who’ve only had beef tartare. Everything at Xiquet is cooked over a wood fire. I started with fire because the paella competitions had them and it adds flavor and aroma. We’re not necessarily rustic, but we wanted an element of that.

Diners are able to watch you cook their meals through large glass planes. Do you enjoy the performance aspect of cooking?

I love it. I could cook seven days a week, three meals a day and it wouldn’t burn me out. A lot of people find it surprising to see you’re the chef and you’re the one cooking. I like being the fish in the fish tank. It allows the guests to see the hard work that goes behind their meal.