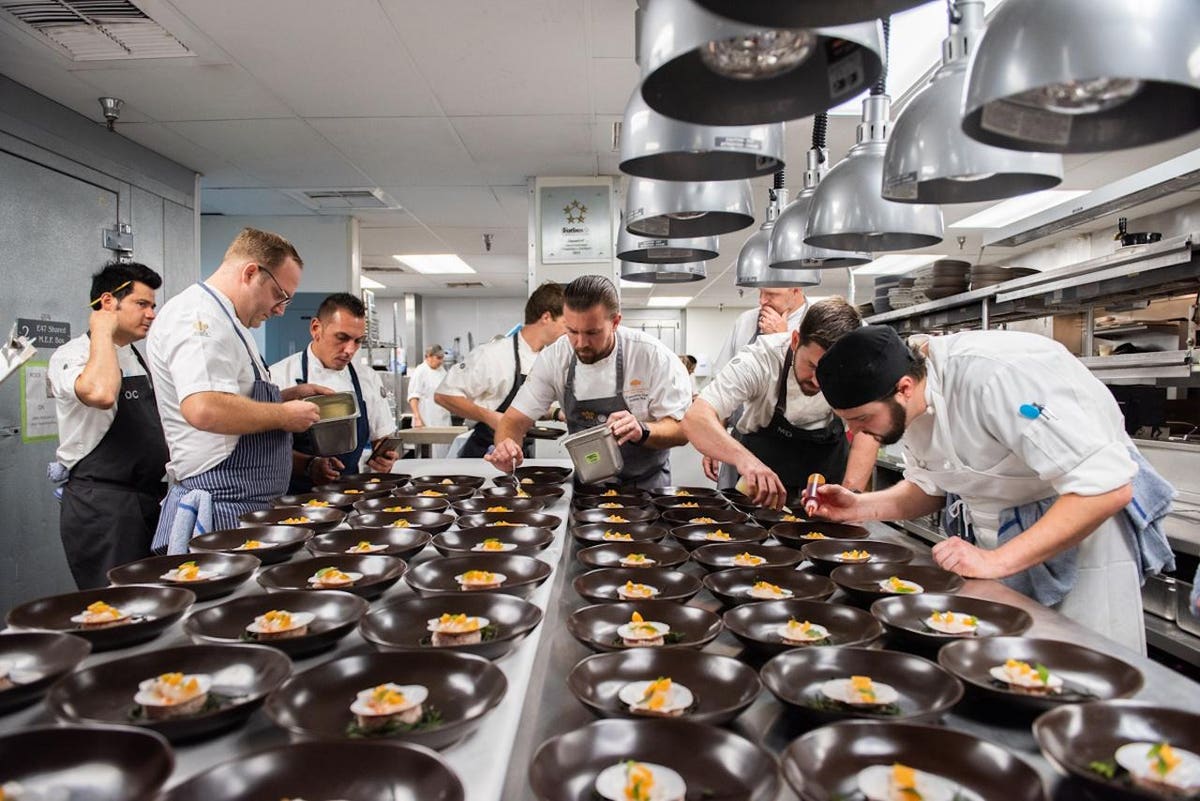 When the Food & Wine Classic in Aspen bumped from June to September this year because of Covid concerns, the enterprising team at The Little Nell Hotel decided to fill the signature summer kick-off weekend with its own gastronomic extravaganza. Taking place over four days that ended on Sunday, the inaugural Little Nell Culinary Fest, with flavors and guests and chefs from all over, is the latest sign that the Nell and Aspen itself are back to business with a bang.

In other words, it was, at long last, a typical Aspen weekend. Mask and distancing ordinances were lifted earlier this month, and there’s scarcely a sign of the pandemic that had America’s most glamorous ski town in a vice grip when the virus initially landed in Colorado in March 2020. That’s when a group of visiting Australian skiers were identified as the state’s first “presumptive positive” cases and mountain paradise went into lockdown. Two of the nine skiers who contracted Covid were guests at The Little Nell.

I asked Jonathan Fillman, The Nell’s amiable general manager, how the hotel and surrounding community made it through 2020-2021’s rocky ride, and what’s ahead now that guests are stampeding back to town.

First, talk about the decision to launch a food festival after Food & Wine changed course on scheduling. That was a bold move on your part.

Jonathan Fillman: It was a risk, yes. In February, we were very much in the heart of the pandemic when we learned that the Food & Wine festival would not be coming back. I kept thinking about it and ever the optimist, I felt there could be an opportunity. I spoke to our culinary director, Matt Zubrod, and said I’d like to put together an event and work with Relais & Chateaux. I wanted to call it ‘Gather: An Epicurean Food Experience,’ but everyone said, ‘Yeah, no, Jonathan, we can’t use the word ‘gather.’ So we called it The Little Nell Culinary Fest instead, and, fortunately, it worked out beautifully.

Will the Culinary Fest become a regular Aspen event?

Jonathan Fillman: We hope it will be a tradition for years to come but I think it will be an end-of-season fall festival-type experience. We wouldn’t schedule it in June again since Food & Wine will be back at that time next year. What I love about all these festival events is that they’re about embracing community. At The Little Nell we define luxury as ‘time well spent,’ and events like these are how we want to spend time: Eating good food, experiencing great service and making good friends along the way.

Take me back to March 2020. What was the first sign it wasn’t going to be a normal spring for The Little Nell?

Jonathan Fillman: I had just gotten off a plane and when I landed I noticed I had a dozen missed calls, mostly from the Department of Public Health. They said, ‘Jonathan I want you to know you have two of the first presumptive positive cases of Covid in Colorado staying at your hotel.’ Fortunately, we had planned for it. We had put together practices and policies as best we could at that time. But here’s the important thing: we decided on the spot to be completely transparent. There were some hotels that kept the news quiet, but right away, we put letters in the guest rooms letting people know. It was never something to hide. And I must say, the reaction reminded me that we have the most gracious, thoughtful guests on the planet, although I know I’m biased. We didn’t have anyone check out. We had guests come down to the front desk and say, ‘We feel so bad for this couple. Can we buy them dinner? Can we go shopping for them?’ People said we’re not going to live in fear. We’re going to get through this together. That set the tone as we went forward.

What a difference a year makes since the hotel reopened again last summer. Sounds like business is brisk at The Little Nell.

Jonathan Fillman: Ha. Yes. Things are doing incredibly well. The rates are very high but that’s because there’s more demand; we have more demands than we have rooms. And we’re not the only ones. My colleagues who work as general managers around town are saying the same thing. Aspen is 100 percent open and people are really eager to get back here.

What’s happening this summer at The Little Nell?

Jonathan Fillman: The summer looks fantastic. One of the things I’m most excited about is the Clip-in with Christian Cycling Camp we’re running from August 8 through the 15th. We have vintage cycles from Ventum, our sponsor, and it’s a chance for cyclists of all abilities to ride Aspen’s most scenic routes with support the entire way provided by our pros and the Nell staff. We’ve added two days of gravel riding, which is all the rage in cycling right now and everyone will be on the Ventum NS1 road bikes and GS1 gravel bikes. We bring out several professional riders, including our host, Christian Vande Velde, who’s a retired pro and a commentator for the Tour de France as well as a popular Peloton instructor. We’ll also have special guests Mari Holden, a retired pro cyclist and Olympic Silver Medalist. Kathy Pruitt, a retired downhill world champion and a mountain biker who has made a name for herself competing on gravel; and Diaa Nour, the CEO and founder of Ventum, who’s an accomplished triathlete.

And for those who aren’t up for days of cycling?

Jonathan Fillman: We’ve totally revamped our adventure program this summer with a new fleet of Audi electric vehicles. We’re the only property in town to have off-road Audi e-tron all-electric SUVs. We take you to the top of the mountain, up to the 11,212 foot summit, or out to the Continental Divide. We do boxed lunches or you can go all-out and combine the ride with a sommelier-led wine tasting. We’ll stop at Buckhorn Cabin, open a bottle of Dom Pérignon, and continue with wines pulled from our 20,000-bottle wine cellar. If that’s more your idea of adventure, it’s really hard to beat this experience.

Is it true there’s a new password-only bar hidden in The Nell somewhere?

Jonathan Fillman: Well, you don’t really need a password, though you will need a reservation. We turned an old boardroom into a speakeasy, though you’d never know it just by walking by. It’s hidden behind a giant bookshelf that opens to a beautiful new private space with a pool table, couches and bar and amazing sound system. We’re doing seated dinners of up to 10 people. We also redesigned our wine bar upstairs—a venue formerly known as Chair 9. It’s now a place for more intimate gatherings with a lounge-y atmosphere for small parties. What’s fantastic is that we brought in more than 5,000 vinyl records for the DJ booth and have an incredible sound system. You feel that only-in-Aspen vibe there.

This interview has been edited and condensed for clarity.